The fifty fifty presents a special screening of A MATTER OF TIME feat. Kathryn Calder 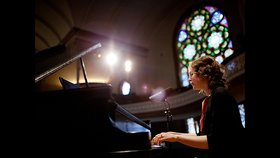 The fifty fifty arts collective and the Copper Owl are pleased to present a special screening of A Matter of TIme featuring a Q&A session with Kathryn Calder.

This screening is a fundraiser for ALS (also known as Lou Gehrig's Disease) a progressive neuromuscular disease in which nerve cells die and leave voluntary muscles paralyzed.
http://www.alsbc.ca/

Suggested donation is $5 with the option of donating as much as you like. SCreening starts at 8:30. Doors at 7:30PM.

Imagine finding out your mother has 2-3 years left to live. Kathryn Calder of The New Pornographers was faced with this gut-wrenching revelation when she learned that her mother had been diagnosed with ALS, taking her down a path few could endure.

ALS (commonly known as Lou Gehrig's disease in the US and Motor Neurone disease in the UK) is a fatal disease, which attacks the neurons in the brain and spinal cord, progressively impairing one's ability to walk, talk, breathe or swallow. The cause of the disease is unknown and there is no cure.

Before the bad news hit, Kathryn was relishing in a beautiful adventure. A few years prior, her mother, who was adopted, had found her birth mother, and thus a whole other family for Kathryn. Relatives emerged, loved ones multiplied overnight. And all the more spectacular, her new found long lost uncle, Carl Newman, happened to be the front-man behind an indie rock super group called The New Pornographers. With this serendipitous revelation, a new realm of musical collaboration and opportunity spawned and prospered. Then the news about her mother's illness crashed right through the newly lit family home.

As a result, Kathryn decided to move back into her childhood home to become her mother's full time caregiver. It was during this turbulent period, that Kathryn became inspired to write and record her first solo album; a parting gift for her biggest fan. She recruited a producer and converted her mother's living room into a recording studio. As her mother's condition steadily worsened, Kathryn's challenge became clear: she needed to complete the album in time for her mother to hear it.

A Matter of Time illustrates the bravery and compassion that can bloom from struggle. How even the most enduring battles can conjure unimaginable feats of strength and triumph against unexplainable forces. This is an inspirational story about courage in the face of disease. It’s about letting difficult experiences meet artistic impulses and making a positive difference through music.