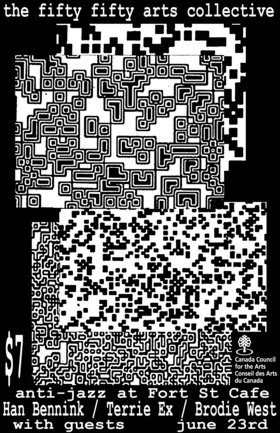 the fifty fifty arts collective (http://www.thefiftyfifty.net/)
and
The Canadian Council for the Arts (http://www.canadacouncil.ca/)

all the way from the Netherlands

BENNINK
Dutch drummer Han Bennink is a living legend celebrated the world over for his invaluable contribution to the development of European Free Jazz since the 1960s. He has worked extensively with many of the great creative improvisers such as Derek Bailey, Peter Brotzmann, Cecil Taylor and Willem Breuker. In 1961 he formed the Instant Composers Orchestra and I.C.P. record label with Misha Mengelberg which is still going strong over 40 years later. A highly versatile musician, Bennink is also often referred to as one of the world's most swinging jazz drummers, having shared the stage with many jazz legends such as Dexter Gordon, Wes Montgomery, Eric Dolphy, Sonny Rollins, Ben Webster and many more.

EX
Guitarist Terrie Ex is a founding member of legendary Netherlands based experimental punk band The Ex, with whom he has played for more than 30 years. He is also busy performing internationally with Paal Nilssen-Love and Massimo Pupillo in Off/On/Off, and as a member of Ken Vandermark and Nilssen-Love's Lean Left.

WEST
Canadian alto saxophonist Brodie West divides his time between Europe, where he plays regularly as a member of The Ex and Getatchew Mekuria plus Guests, and his home of Toronto, where he is known for his work with such bands as Broken Social Scene, Apostle of Hustle, Deep Dark United, Drumheller, Eucalyptus and The Lina Allemano 4.

The trio of Han Bennink / Brodie West / Terrie Ex plays buoyant, raw and unreserved improvised music which defies classification. The chemistry between these three highly individualistic musicians is tangible and powerful. Formed in 2008 while West was on tour in Europe with The Ex and Getatchew Mekuria plus Guests, the trio developed out of two well known duos; Bennink and Ex (Zeng! released in 2000 and The Laughing Owl in 2007 on Terp Records) and Bennink and West (Brodie + Han 2003 on Lorna Records). The band is touring Canada in June in support of their album Let's Go! released in 2010 on Terp Records. http://www.theex.nl/history.htm http://www.hanbennink.com http://www.lornarecords.blogspot.com/p/brodie-west.html
http://lornarecords.blogspot.ca/p/han-bennink-brodie-west-terrie-ex.html

a portion from the proceeds will be going to the fifty fifty arts collective. http://www.thefiftyfifty.net