LSD AND THE SEARCH FOR GOD, Scars and Scarves, Soft Alarm 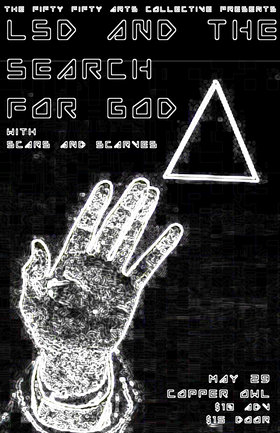 LSD AND THE SEARCH FOR GOD
https://lsdandthesearchforgod.bandcamp.com/releases
https://www.facebook.com/lsdandthesearchforgod/
LSD and the Search for God hit the Northern California coast in 2005––seemingly from another place and time––dosing audiences with hypnotic performances built upon swirling guitar sounds, otherworldly drones, fuzzed-out pop melodies, and dreamy vocal harmonies. As reviews of their first shows drew comparisons to My Bloody Valentine, Slowdive, Yo La Tengo, Spacemen 3, and Sonic Youth, the band quickly developed a must-see reputation within San Francisco’s underground psychedelic music community.

After only a handful of shows, Kurt Heasley asked the band to play with Lilys in San Francisco in spring of 2006. Shortly after, they were invited on two separate West Coast tours: first with Spectrum (Sonic Boom of Spaceman 3), then with Creation Records’ The Telescopes (on their first-ever tour to the U.S.).

In 2007, LSD signed with indie label Mind Expansion and their self-titled debut EP sold out from the record label and its distributors before the official release date. The EP was subsequently picked up and reissued on vinyl (Deep Space Recordings, 2008). Around this time, LSD was featured on three additional compilations: Mind Expansion Vol. 1, M.E. Vol. 2, and Australian nugazer compilation Take Me on the Wildest Spree (Rubber Records/EMI, 2008).

The momentum that was generated—from their live shows and stellar reviews of the sold-out EP—paved the way for years of more West Coast gigs, three U.S. tours, a Canadian tour, and festival invites—including a 2013 appearance at The Black Angels' annual Austin Psych Fest.

A new EP, Heaven Is a Place, is scheduled for vinyl and digital release in autumn 2015 (Deep Space Recordings).

tickets advance $10 +s/c or $12 at the door.
https://www.eventbrite.ca/e/lsd-and-the-search-for-god-with-scars-and-scarves-and-guests-tba-tickets-22803857953
Tickets at: https://www.eventbrite.ca/e/lsd-and-the-search-for-god-with-scars-and-scarves-and-guests-tba-tickets