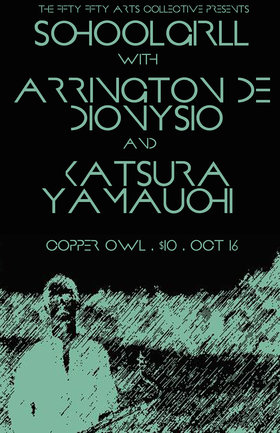 Another evening of experimental free jazz flavourings put together by The fifty fifty arts collective. This show is not to be missed! Guests to be announced shortly. Early show, doors 8PM over by midnight. $10

An uncompromising voice in contemporary music, Arrington de Dionyso integrates ancient soundmaking techniques with trans-modernist inquiries into the nature of consciousness. His propulsive improvisations utilize voice and reeds (primarily bass clarinets and his invention the Bromiophone) as multiphonic tools in the navigation of liminal spaces between shamanic seance and rock and roll ecstasy.

While deeply rooted in the punk inclination to tear down musical standards in an effort for liberation, Arrington's music weds its no-wave iconoclasm with the spiritual searching of Ayler era free jazz to reach towards an unveiling of primordially potent universalities. His compositions embrace sounds as colors, placing emphasis on the complimentary spectrums- from circular overtones whispered through bamboo flutes to the penetrating deep and guttural howls of amplified throatsinging- all with the lungs of an athlete.

Founder of the Olympia-based Old Time Relijun in 1995 and the trance-punk "a la javanaise" ensemble Malaikat dan Singa in 2009, Arrington has toured extensively and maintains ongoing fruitful collaborations with musicians throughout Europe, North America, Japan, and Indonesia. No matter the continent, he seeks innovative approaches to improvisation both intuitive and indigenous. In 2015 he completed a film "Reak: Trance Music and Possession in West Java" documenting a ground breaking collaboration in which Arrington performs on the bass clarinet with the participants of a trance possession ceremony in Sunda, Indonesia.

In August/September of 2016, Arrington de Dionyso will be the Sound Artist in Residence at Brooklyn's Pioneer Works, where his projects will include research on woodwind mouthpieces better suited to microtonality and a very special collaboration with SENYAWA from Yogyakarta, Indonesia.

Whether as a band leader or solo performer Arrington's music evokes an "Ancient Future", sometimes shocking and hallucinatory, always aiming to channel Spirit.

Katsura Yamauchi picked up his first saxophone in the early 1970s and was quickly drawn to modern jazz, avant-garde and free improvisation. Born in Beppu, far from the traditional creative centers around the bigger cities in Japan, Yamauchi was until recently relatively unknown, but has now shown himself to be one of the most unique musicians in Japan.

For years Katsura Yamauchi was sporadically active as both musician and concert organizer, and helped arrange performances in Japan for veteran musicians from both the USA and Europe, such as Derek Bailey, Han Bennink and Milford Graves.
Not until 2002 did he quit his regular job to dedicate himself fully to music. Yamauchi was influenced by the new experimental sounds coming from Tokyo, but had developed his own original style, mixing improvisation and minimalism with melodic elements. The music is at the same time challenging and easily accessible, unrecognizable and beautiful.

"Katsura Yamauchi is really both a new and a veteran artist... I am greatly refreshed by his energetic and confident performance."

A letter Of Recommendation for " SALMO SAX "
(by Yoshihide Otomo)

Katsura, Suddenly Coming to Europe and Unexpectedly Talking Part in My Stage in Belgium and Being Applauded by All the Audience ! What a Surprise ! It was on that occasion when I realized for the first time that he was far from a naive and middle-aged musician. We should not be deceived by his appearance of fishing a stream. Katsura Yamauchi, who lives in Oita, has sent me a CD. Being an office-worker for over 20 years, he is a 48 years-old saxophonist, and has enjoyed composing unique music of his own without belonging to any music circles. Last autumn suddenly, he quitted his job. Though he is already known to us as a highly competent musician, he has lived his own life far and different from a city life. He takes no practical needs whatever into his account. To be true, I was much worried about his decision. He came abroad without regard to my worry, after giving several live performances in Tokyo. He is the musician living in such a regional city as Oita who has challenges an mprovised music of the world with his sharply critical mind. He is really both a new and a veteran artist who takes a detached view of the distance between his music and the actual world. Only two months later, he released his first CD album of a perfect sax solo. I am certain that he recorded them just after returning to Oita in Japan. I am greatly refreshed by his energetic and confident performance. In the present situation of music, a free improvisation music seems to have established its various standard forms. But I'd like to emphasize strongly that Yamauchi stands a loof from such a tendency.