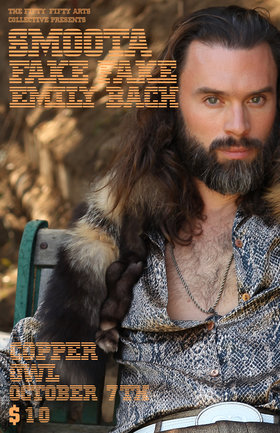 the fifty fifty arts collective is get'n sexy with

Smoota’s new album PHEROMONES is an arousing soak in the hot tub of your sexual imagination. Inspired by the warm and sensual sounds of 70’s soul, Smoota’s follow-up to his 2013 debut FETISHES is a risqué exploration of the modern sexual landscape. A New York City musician who has worked with TV On The Radio, Run The Jewels, Sufjan Stevens, Steven Tyler, Aaron Neville, and many others, Smoota performed all the music on PHEROMONES himself, adding only backup vocals, strings, and a (fake?) orgasm from a friend in Australia. With a unique mix of honesty, curiosity, and sly humor, the album puts both a dip in your hip and a smile on your face. Touching on the polyamorous urge, happy S&M relationships, taboo lust, erotic intimacy, and more, Pheromones will turn out the lights, liberate your mind, arouse your body, and then make you breakfast in the morning. http://www.smoota.com

Following a casual collaboration in August 2018, the duo became fast friends and writing partners, with an explosive creative energy and natural chemistry between them. Their self-described 'Disposable Love' approach to songwriting has been the result, with a focus on rich gospel arrangements, funk-drenched guitars, offset percussion reminiscent of the late J. Dilla, and a wry wit to Campbell’s contemplative lyricism.
http://www.fakefakemusic.com

Experimental violinist best known for their work with Big John Bates and the Dirty Spells plays a very special one time only solo set.
https://dirtyspells.bandcamp.com/
http://bigjohnbates.com/

This show is funded by Feed the Arts in the CRD