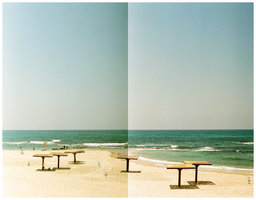 Fri. August 26th 2011 - Sat. September 11th 2010
@  the fifty fifty arts collective (All Ages)
Both fourth year students at the University of Victoria, Henry Slaughter and Kyra Kelpin have found common interest in process and output. While Henry’s submitted work is based abroad, Kyra’s is based locally, and they have found similarities in subject matter and composition; the differences lie in the atmospheric quality and feelings of nostalgia.

Henry ...Slaughter's photography stems in large part from his sense of design and knack for clean composition. Interested in unique portraiture and capturing people in their immediate landscape, everything is shot on 35 mm film with a fixed 50 mm lens. For this series, he collected a large portion of travel photos from the Middle East, Europe and New York City in attempts to compare and contrast Kyra’s collection of photos taken in British Columbia.

Images captured for this showing of Kyra Kelpin's work were all shot in the winter and spring of 2010, between and around Tofino and Victoria, BC. This show references the spaces and landscapes that are inhabited and viewed in our daily lives. Her personal perspective and choice of subject matter is derived from the visual experiences that are deemed valuable in appreciating and valuing the island where she resides. This work is based around her home, and ongoing. Current images are shot with a Kiev 88 medium format camera, and edited with the intention of leaving some of the “quirks,” inherent with shooting film photographs