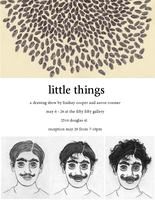 Fri. May 6th 2011 - Sun. May 29th 2011
@  the fifty fifty arts collective
Aaron Rosner is a self taught artist who lives and works in Victoria. He has self published a number of zines and comics and his mediums include illustration and diorama-like sculpture.

"Aaron lives in Victoria, where he draws pictures and makes little things."
"I like baking biscuits shaped like shortbread cookies when I get the chance." he says of himself.
Eating pizza and romantic walks to the fridge are always possibilities with Aaron.
He lives in a cool neighbourhood but they cut down all the trees next door and made a concrete wall.
"I really want to make an impact." he says when queried about an ugly nail sticking out of the gallery ceiling. "That's what matters, and hey, I have several hammers; We can all use them and turn this shitty task into a piece of cake."
He drinks tea and beer, etc.
In "Little Things" Aaron creates a world of character driven chaos, charisma, and charm. It is truly a glimpse into his brain and a feast for the eyes.


Lindsay Cooper is a Victoria-based artist and treasure huntress with a
flair for fashion and the heart of a lion. Born in Calgary Alberta,
she was raised with the simplicity of the prairies as inspiration.
Lindsay obtained a B.F.A in Visual Arts from the University of
Victoria with a focus on painting, and digital video production.
Following graduation, her creative focus switched from painting to
drawing after being inspired by the works of Albertus Seba and James
Audubon. "Little Things" is a collection of new works which depict the
delicacy of natural objects and their repetitive nature. Feathers and
ferns are used in an intricate way to show both the movement and
intimacy of line and form.

Mid-show reception is held on May 20th from 7-10pm. There will be refreshments, artist prints, an antique toy machine, and freebies!
https://www.facebook.com/event.php?eid=143807299025767
Artists: Lindsay Cooper, Aaron Rosner