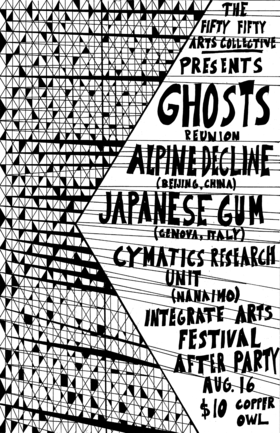 The fifty fifty arts collective is proud to carry on the tradition of hosting The Integrate Art Society (Integrate Arts Festival)'s after party. This year it's at the Copper Owl featuring 4 amazing bands.

Here are the details

GHOSTS (reunion show!!)
http://music.cbc.ca/#/artists/Ghosts
http://livevictoria.com/ghosts
Ghosts features former members of the Truth About Angels and Three Inches of Blood... Formed as an outlet for the members to explore various aesthetic themes, Ghosts has evolved into a challenging and dark dialogue between angular no-wave strivings and traditional song-writing formats that evokes the confusion of a generation raised knee-deep in hegemonic pop culture. Members live in Victoria, British Columbia - an island city that's produced a consistent stream of exploratory and diverse musical acts... Is it the large portion of disaffected, cultured children of civil servants that accounts for this, or the isolation of being on an island? With song structures that bring to mind such references points as Drive Like Jehu, Depeche Mode, Television, early Rough Trade Records groups such as the Young Marble Giants, and Suicide, Ghosts are interpreting post-hardcore for the twenty-first century.

ALPINE DECLINE (Beijing, China)
http://alpinedecline.com/
Alpine Decline are a two piece rock band buried beneath a hundred feet of snow. A caustic guitar with rippling delay rides on expansive, tidal drumming. Their eponymous first record, the follow up “VISUALIZATIONS” and “DISAPPEARANCE” unwinds with trickling melodies with lyrics like glimpses into some lost film or yellowed manuscript. Live, the pair push off each other and throw heavy punches, channeling their sounds through layers of tape. Alpine Decline continue to write and record. Alpine Decline will be touring in support of their newest album, GO BIG SHADOW CITY. Before this tour they'll also be in the studio with M Geddes Gengras (Sun Araw, Pure X, Akron Family, etc.) to record another new album.

CYMATICS RESEARCH INSTITUTE
http://sevenpotatoes.bandcamp.com/releases
Featuring a rotating cast local luminaries from such bands as Moths and Locusts, Wolf Parade, Top Men, Colliding Canyons, and The Happy. The link is above is a recent collab with the almighty Damo Suzuki!

$10 at the door!!
Presented by: the fifty fifty arts collective and Integrate Arts Festival