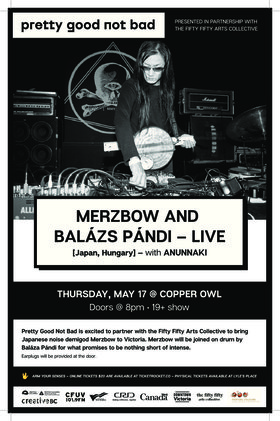 Pretty Good Not Bad & The fifty fifty arts collective present:
Merzbow & Balázs Pándi with Annunaki
----
Merzbow
For over thirty years, Merzbow (aka Masami Akita) has been the biggest and most recognizable figure on the international noise scene. Since 1980, he has released over 400 recordings, and has collaborated with various artists. There is no need to argue: Merzbow stands as the most important artist in noise music. The favorite moniker of Japan's Masami Akita appears on hundreds of albums. The name comes from German artist Kurt Schwitters Kurt Schwitters famous work Merzbau, which he also called The Cathedral of Erotic Misery. Akita's choice reflects his fondness for junk art (through Schwitter's collage method) and his fascination with ritualized eroticism, namely in the form of fetishism and bondage. All these elements constitute the Merzbow persona.
----
Balázs Pándi
Balázs Pándi is a Hungarian-born improvisational and avant-garde, grindcore drummer, composer who has worked extensively with electronic and industrial musicians as well as jazzmen. Pándi's early outfits were the Venetian Snares,To Live and Shave in LA, Zu and the iconoclastic Killimanjaro Darkjazz Ensemble. He has worked extensively with industrial pioneer Merzbow on the road; the pair have recorded a number of albums together, including dates with saxophonist Mats Gustafsson. They headlined the experimental stage at the Scion Rock Fest in Tampa, Florida in 2012.They released Cuts in 2013 on RareNoise. For the follow-up Cuts of Guilt, Cuts Deeper, they were joined by Thurston Moore of Sonic Youth.
----
Anunnaki
https://anunnakibc.bandcamp.com/