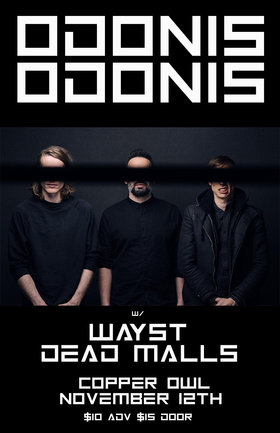 the fifty fifty arts collective is
proud to present

Executed with precision, every sonic component of No Pop commands attention. Stripping down instrumentation to a handful of synths and an electronic drum kit, the band worked quickly to write and record, bringing demos and improvised takes into the studio and completing the recording process over the course of three days. The result is a focused blend of hard-hitting industrial, techno, and noise – but each track on No Pop is never just one of those elements. Pulsing rhythms lay the ground for textural soundscapes masterfully woven together to create a palpable sense of doom that is thick and satisfying.

Taking its name from the anti-commercial No Pop movement, which infers that there "is no expiration date on music nor is it limited by geographic or regional boundaries," No Pop is raw with emotion that's elevated by deft production. Each hypnotizing meditation captures an uncomfortably honest cynicism with a brush of humor, emphasized by sparse vocals that taunt the current dystopia of technology, human emptiness and the mundane. No Pop is the soundtrack of a sinking ship, and we're all happily aboard to go down with it.