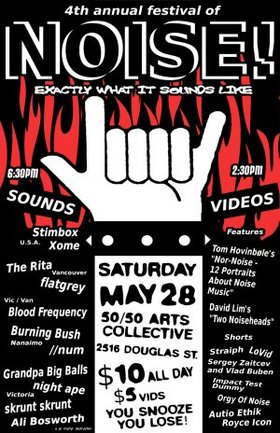 DIY production house PR Martyr is proud to announce that the fourth annual Noise! festival will be taking place here in Victoria, B.C., Canada on Saturday, May 28, 2005. The festival is an all day event focussing on (surprise) noise based musics and media and will be featuring the talents of artists from Canada and the US creating sounds ranging from harsh digital noise to strange ambient to crazy performance art to outsider freakout and back again. Decent PA, video projection, merch table and lots and lots of noise. This is the real deal.

Advance tickets available at Ditch Records or via PayPal (contact moron@industrial.org for details).

Stimbox has been producing harsh, brutal, dynamic and loud noise since 1994. A number of Stimbox MP3s can be had via noisemp3.com.

Xome is a harsh noise project conceived and operated by one Bob Scott Sato which aims to bring some of the most rude and abrasive sounds to the noise world. Xome got its start back in 1989 and has over 40 audio and video releases from several different music labels. A number of Xome media files (MP3s and video) can be had via the project's official website.

The Rita (Vancouver, BC)

The Rita is a Canadian harsh noise project that started in 1996. Their influences include Italian Giallo films, Great White and Bull sharks, the gillman, lake/sea monsters, and the female posterior; always striving for crunched out rumbling walls of noise. A number of their MP3s can be had via noisemp3.com.

flatgrey is a primarily harsh noise focussed project based out of Vancouver, BC. Recorded output includes a large number of DIY hand crafted releases and live you can expect an ear cleansing featuring anything from a dangerous pedal array to a hijacked car alarm.

A noisy tag team comprised of Noel (Throne of Ashes) and Harlow (Funerary Call) will be making their debut at this year's Noise! Festival.

This duo has performed at all previous Noise! events and we are proud to have them back. Burning Bush presents an alien sourced mix of weird electronics and perforance art that is at often darkly humerous as it is unnerving.

Using a varied mix of acoustic and electronic sources, //num creates a swirling organic mass that is difficult to ignore.

As stated on his website, Skruntskrunt belongs to one Abram Hindle. Mainly noise with some ambient moments, Abram uses custom designed software running under Linux to create his own personal cacaphony. His sounds are vibrant, immersive and often extremely unstable.

Self-described "retardo noise" outfit Night Ape likes to don silly suits and attack the audience's ears with everything from circuit bent tows to electrifried garden implements. An excerpt of their debut at the 2004 Noise! fest can be had here (Quicktime format).

Ali appeared at the 2004 festival as a latch minute pinch hitter and we were lucky to have him. In case you don't believe us, Ali has MP3s available from his 2004 Noise! Fest appearance which should remove all doubt.

"Nor-Noise" is a documentary about Noise music - perhaps the most exiting and innovative form of music to evolve in the last years. The film maker Tom Hovinbøle has since the project started in 2001, interviewed some of the most central artists, both internationally and in Norway. The artists speaks about their relationship to tis music: What is it? Where does it come from? How do you work with pure sounds? Which possibilitys opens up with the new sound processing oportunities? Noise is also put into an historical context spanning from the Futurists and Luigi Russolo befor the First World War, through the first experiments with electronical music in the fifthies, the avang-gard in the sixties, the Industy and Punk movements in the seventies, before Noise establishes it self as a music in its own right in Japan during the seventies. The film also contains a lot of rare concert footage with the artists.

This short doc features interview and performance footage of two of San Francisco's finest noisicians Xome and Stimbox, co-founders of NoiseMp3.comNoiseMp3.com and Harshnoise.com.

Mangled video strangeness from the folks behind the ever intriguing Sounds From The Pocket label.

A mix of found footage and custom shots manipulated via hardware and accompanied by a mutating electronic soundtrack.

Half of Mansfield, Ohio based DIY label and distro Greywork Industries, Royce is busy with a number of musical projects as well as being an active contributor to industrial.org is a musical label/ disto run by and for the music of Royce Icon and Distorria. His goal is "expression through sound; primarily unusual and experimental sounds" with that manifested here in video short form.


DVD-Rs of the 2004 Noise! festival will be available for purchase at this event.