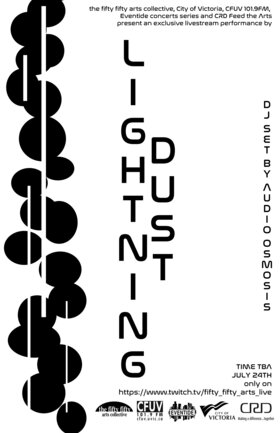 Lightning Dust
an exclusive livestream event at a secret location
The show will be broadcast on Twitch July 24th (time TBA)
https://www.twitch.tv/fifty_fifty_arts_live
(you don't need a Twitch account to take part)

Lightning Dust is made up of Amber Webber and Josh Wells. 2 veterans from the BC music scene. Nowadays the band is composed of a rotating cast of additional members to help fill out their live sound however all of the music is produced by Wells and Webber.

Their latest album Spectres came out October 2019 released on Western Vinyl https://lightningdust.bandcamp.com/
^^^^^^ CHECK IT OUT!! ^^^^^^

Josh and Amber have left an indelible mark on the BC music scene and still continue to do so. Former members of Black Mountain, other projects they have been a part of include P:ano, Jerk With a Bomb, Blood Meridian, The Cave Singers, Radio Berlin, Destroyer, DRaaWL Sur Une Plage, Ashley Shadow and Autogramm just to name a few. Josh also has extensive producer credits working through his production space Balloon Factory in Vancouver.

Lightning Dust is a very special project on it's own. The band composes music around Amber's songwriting and voice that is truly unique. The focus of course being those lyrical compositions. The music is spacious complimenting Amber's voice with many instruments starting out acoustically with guitar, then moving on to more synthesized sounds for their last 2 LP's Spectre and Fantasy.

"Webber has been quoted in prior interviews as viewing Lightning Dust as an opportunity to explore her Goth side, and Wells is quick to confirm this in his interview with Earshot. “I’d say we’re definitely on the same page there. Although I’d say it’s just more of our basic conception was that it was going to all be about melodrama. We didn’t want it to just be a ‘band’ sort of thing – we wanted to incorporate a bit more theatricality, more of that ‘non-band’ type stuff. … If it comes off as a bit over-the-top at times, then that’s good,” Wells divulges."

This event is free however donations will be accepted on behalf of the band to help supplement this performance. Links will be posted shortly.

Stay tuned for more information as it comes to us ;)