Separated At Birth: A day of Mural Painting, Exhibition and Music. 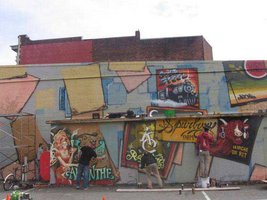 Two of Victoria's independent and dynamic centers - Concyse Skateshop/Incite Screenprinting and The Fifty Fifty Arts Collective - pair up to celebrate the creation of a promising new outdoor mural project at 2516 Douglas St, the home of both organizations. The bare wall facing the massive parking lot on douglas just north of bay (formerly the site of steady unsanctioned tagging, an outdoor screening, the fifty fifty / ministry of casual living street hockey tourney for the dispossessed, the great oil slick of 05 and beyond) will be given a much needed face lift as seven of Victoria's emerging artists will design a 8 by 16 foot graffiti mural right before the very eyes of the public. This work is intended to showcase local mural and graffiti art talent and draw attention to emerging local art practices that contribute to Victoria's contested debates around gentrification and preservation. The public is encouraged to converge and watch this new work take shape between the hours of 1-5pm at 2516 Douglas St on Saturday, May 5th . A hot dog BBQ will be on hand for your snacking pleasure.
Contributing mural artists include: Peter Allen; Amos Daniels; Chris Dobell; Stu Dobell; Morgan Macauley; Shaun O'Keefe and Luke Ramsey.


An evening soiree of art, music and cavorting will follow (8pm -12am) featuring individual art exhibitions at both the fifty fifty and Consyse/Incite, and live music from Beasts Superbeast. The fifty fifty will be unveiling its renovated gallery (a two month process that is currently seeing the final touches come to fruition), complete with new dimensions and endless possibilities for Victoria's emerging artists. The featured show, Zombiechicken vs Manworm, evokes the paintings and drawings of Cam Kidd and Peter Allen. Zombiechicken vs. Manworm explores the theme of Zombification and man-worm metamorphosis. Next door, Concyse/Incite will feature the painting and photographic work of three local talents in a show titled Catastrophic Simplicity. Aden Ellis, Maegan Johnston and Keighley Kodric all have all dabbled in multi media and this should prove to be an engaging group show.


Indie / Electropop darlings Beasts and Superbeasts featuring, Michael Baker, Calianne Bachman and others, will be providing musical entertainment at Concyse. This promises to be a dynamic exchange between two spaces that share grass roots intatives and community building potential.

Who's that guy making funny noises painting the Wildfire bakery, why are they always repainting it...? Pete doesn't know, but it is always fun, and a chance to meet girls; if they don't observe him acting like a clown. Peter has spraypainted Victoria for over a decade, and gives his heart to the islands Garry Oaks. He works on canvas too, and is having a show with Cam Kidd in conjunction with this mural for the Separated At Birth event.


Traveling Australian artist-musician Stuart Dobell, was always getting in trouble for drawing characters of his teachers in class. Stuart left school at fourteen to join the family business in Signwriting and Screenprinting. Passing Trade school with distinctions in, signwriting and airbrushing, Stuart now applies these skill to his artworks on canvas, mural walls, vehicles, textiles and graphic design.

A transplant from the scenic mill town of Nanaimo, Aden has been creating art since he was a young lad fresh out of grade school. Part owner of Incite Screenprinting & Promotion and Concyse, he is a graphic designer/silkscreener by day and a starving artist by night. Aden draws most of his influence from the evening news, overzealous religious fanatics and that ever marginalized entity called nature. http://www.concyse.ca


Maegan loves photography, particularly shooting with antiquated cameras. Experimenting with film and the developing process hands on to see how far she can manually manipulate photographs is a fond pasttime of hers. Not a fan of run of the mill styles, Maegan looks for the innovative aspect in every photo she takes. An accomplished photo editor/highwire stunt co-ordinator, Maegan's work is far from the norm. http://www.restlessimages.com

Mr. Kidd is known for his Bear Facts and street art over the past several years. An obsessive list maker and book filler, he has taken a break from spraypaint and has compiled visual journals of all his ideas; from childhood, from dreams, and from texts on blow fish, and the making of zombie poison. His drawings are freehand, his research firsthand, and his style... out of hand.

Keighley bases a lot of his design on photos that he has unlawfully captured. A self taught graphic designer, photographer and pipe layer extrordinaire, he draws influence from all aspects of his multi faceted life. In his spare time Keighley also runs ConfusionMedia, a local skate/music/art 'zine. http://www.mergedesigns.ca

Morgan is a self taught artist who has been working in acrylics since 1994. He started painting graffiti in 1996. His friends are his central influence. Outside of painting and he enjoys working in other media.

Coming from an extensive graphic design background, and a wood choppin' childhood is... Trust36. Shaun is a proud family man, and a full time artist. He represents the Woodpile Collective an established visual art group. He is always to be found behind the scenes making things happen. Shaun's style morphs graphics with natural chaos, peppered with a population of characters and calligraphy laced throughout.

Luke's primary creative focus is on Islands Fold, an artist residency
created by himself and his partner Angela. They invite artists free
of charge, and make art books and zines to fund their project. Luke
has collaborated with over 40 different artists, usually connected to
drawing and doodle circles. Luke's creative language has been heavily
influenced by the "d.i.y" punk movement, Prem Rawat's message of
peace, and a growing list of artists from Keith Haring to Keith
Jones. Luke explores the possibility of art that doesn't always
conform to gallery walls, although once in a while he'll hang a frame
or two, but he prefers mailing zines to people. Website: http://www.islandsfold.com
________________
. FMI:
colby: info@concyse.ca
alan: thefifty_fifty@hotmail.com http://www.concyse.ca
Presented by: Concyse and Incite Screenprinting