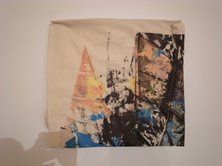 DIALECTIC: Through differing means, Jenn Boyd and Evan Locke, construct a reciprocal exchange, acting as a dialogue in a distinctive language. Through a socially discrete variety of language they confront concepts of space and the role of the viewer within that space.

Boyd’s work is informed by ideas of the psychological aspects of space and examines the built environment in relation to ones perception of the space our own bodies inhabit. As an extension of her previous work, Boyd’s continual concentration lies in the application of fractured space. In playing with ideas of accessibility via disruptive linear images and layering of physical matter, she endeavors to prompt reflection within the viewer. Here she constructs an occasion for greater awareness of ones own body in relation to daily architectural encounters.

Locke’s endeavors, attempt to draw on a material appreciation of the physical properties of space: a constructivist inclination perhaps. Insofar as subject matter, Locke’s current work is based on the idea of urban transmogrification. Everything from the inspired to the absurdly ambitious or just the absurd, is masquerading as solutions to existing and past models of city development; Locke desires to advocate the new works as his two cents on the matter. His paintings are a formal (art) substitution for a series of senseless and fictional suggestions of urban transformation. The processes dictate the compositions, affronting the retinal and physical/tactile with indifference, mirroring his perceived disjuncture between suggestions of urban utopia and feasibility and physically visible present development.