IF You See It Say Hello 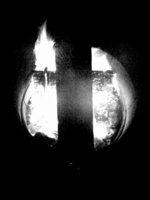 If You See It, Say Hello is a new collection of paintings, prints, and illustrations by Vancouver based artist Scott Lewis. Within these works we see Lewis digging into the history of an industrialized civilization. His own memories of growing up in rural western Canada are infused with its overwhelmingly vast landscapes. These memories coupled with his own personal struggle to justify mankind’s unsustainable path within it conjure up themes of death, religion, innocence and the supernatural. This is Lewis’ first show in two years and first ever in western Canada.

Scott Lewis was born in the grassy plains of Alberta and raised in the mountainous ranges of B.C. He dabbled in post-secondary studies at UBC, Emily Carr University of Art, and Concordia University in Montreal. During his five-year stint in Montreal he founded and ran a record label called Storyboard, releasing music by bands such as Ladyhawk (Vancouver), Quest For Fire (Toronto), Spider/Jane Herships (Brooklyn, NY), People for Audio (Montreal), and Bend Sinister (Vancouver). He was also a founding member of the rock and roll band, Barn Burner, on Metal Blade Records.
Now residing in Vancouver, his art practice has seen a shifting emphasis on painting, photography, and video. He is currently working on a new series of oil paintings, prints, and illustrations for an upcoming solo show.